The World 'Between the Lines': What does Reading Comprehension Really Mean?

For some time now, I have been fascinated by what children are thinking about as they read. This has made me wonder what reading really is. It seems to be so much more than just decoding words. It is a complex network of mental events: comprehending texts, recognizing themes, relating to characters, visualizing imagery, reacting to events, recalling personal narratives and so on.

We are all familiar with the typical literal textbook questions—who, what, when and where—which make us go back to the story to check for specifics. At times (rarely, though), other critical and inferential questionsare also included in textbooks. Here are examples:

Critical: Do you agree with what the father decided to do? Why or why not? Would you behave the same way? What do you think she was thinking when…? (These questions encourage discussion.)

Inferential: Why does the writer give the reader such a detailed account of what happened? Are there similarities between the stories? Differences? Why did they do that? What does that phrase mean?

While these are important questions and we should give time to them, I would ask: What about going beyond the book and uncovering the questions and comments from the children themselves? These are often critical and inferential.

Why would this character like a 'night with no moon'? Why is the book called 'Morning Girl'? Why did Columbus think of the native 1 peoples as 'dirty'? Is there anything Tom will like doing on the farm?

Once we open up this possibility of 'reading between the lines', a deeper world of understanding emerges. It becomes a dynamic endeavour when children connect stories to their own lives, to past experiences, to other books they have read, or to authors and their messages. As Keene and Zimmerman write in Mosaic of Thought (a resource book I treasure):

We want children to develop a command of the cognitive strategies known to be used by proficient readers to create memorable interpretations of books and to read with passion and purpose.

I have engaged 10- and 11-year-olds with three activities in class that help nurture the qualities described above: thinking aloud, literature discussion and classifying questions. Below I describe these with examples.

The class read a short story out loud together and all children made notes of their questions, feelings, predictions, opinions and connections (I needed to model this thinking-aloud process). Once class discussion on the story was done, each child chose one 'note' of his/hers to illustrate and present as a mini poster.

A short story titled My Friend, The Emperor by Shefali Jha (a story from the series Different Tales brought out by Anveshi) tells of a Muslim boy, Adil, who struggles with history homework, claiming that history does not like him. When he visits the mosque, trying to avoid the routine power cut at home, he sees a stranger, a king, who looks 'like he was out of The Arabian Nights'.

Here is one poster by a child: 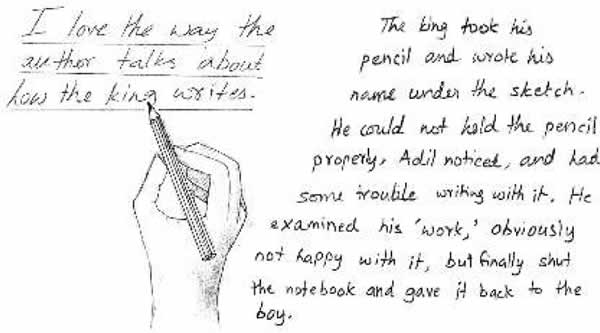 A paragraph about the king reads: 'He had small eyes that made him look like the pictures of Chinese people Adil had seen, but somehow he didn't quite look like them either.'

A student in my class wrote a note in his book as he heard that part read out:

I wonder why we see certain things in people and think they are from a particular place…like when Adil thought he was Chinese just by looking at his eyes.

From here, the child generalized to:

Why do human beings look so different from each other in the world?

This led us on a journey of explaining how early man settled in certain geographic regions and lived in those for thousands of years, developing certain characteristics due to the region and/or due to propagation of that particular group, and not due to large genetic variation. The following week, we discussed the nature of stereotypes, and how we all think in stereotypes often and on an everyday basis. Students shared personal examples:

Lady auto drivers surprise me; gender roles are rules we have made up.
I used to think taller meant older.
I saw a dark person in a mall and got scared.

Following this, another student in the class began to wonder about the differences between caste and religion and drew beautiful sketches of women in burkhas in her notebook. Later in the term, she decided to make a poster about fairness that addressed caste discrimination.

In her article It's about time to talk, Mary Kitagawa writes:

The rationale for spending almost two hours a week in speculation, hypothesis building, group reflection and elaboration of emerging thinking about literature is that students read better and develop new perspectives.

These took place over some weeks, based on the reading of a novel. In this scenario, a group of five to six students all read the same book on their own, a chapter or two a week, and then gathered to discuss their points or notes. These discussions happened at least once a week, for about half an hour, with a teacher acting as a guide. This followed well after the first activity described above.

Here are examples of notes that the students took while reading on their own:

Why is the book called 'Morning Girl'? She may be the most important character later on. 'The day remembered us' is a very unusual phrase. I noticed that Star Boy has a friend called Red Feathers. What does this mean: I was glad I didn't have to drink because then I'd be thirsty? I found out that Sharp Tooth lives quite close by, because he fixes the canoe. Let me think … Are Star Boy, Morning Girl and Sharp Tooth their real names? They always call them these names … it's probably translated from another language. Is this fiction or non-fiction? We got into the people in the story, like Star Boy and Morning Girl, as if they were normal people like us. When Columbus came, he described them as if they don't know anything, like they are young kids.

One time, a student read out the following extract from Midnight Fox by BetsyByars:

I (Tom) remembered one time when Petie Burkis came over to my house and told me that he knew a way that you could figure out when you were going to die – the very day! He'd learned this from a sitter he'd had the night before. It was all according to the wrinkles in your hand – you counted them in a certain way. Well, we sat right down and counted wrinkles in my hand.

The other students commented:

It is a silly superstition. Just a joke. Petie's sitter shouldn't have told him about the hand. How strange to count the lines. The sitter was teasing but Petie took her seriously. A superstition is when you really believe in something.

This became an opportunity to share opinions the children had about superstitions or beliefs. Mary Kitagawa writes:

With tentative ideas supported by time and a focusing framework, student-led literature discussions, ideally with an adult participant, are a way to explore belief systems.

As a class, we analysed everyone's questions and comments by categorizing them on a chart (this could be seen as a process of encouraging metacognition). Children noticed and realized that some of their questions were answerable by looking at the text; some were unanswerable; some gained clarity by discussing; and some gained clarity by researching. We were back to literal, critical and inferential questions, but this time provided by the children! 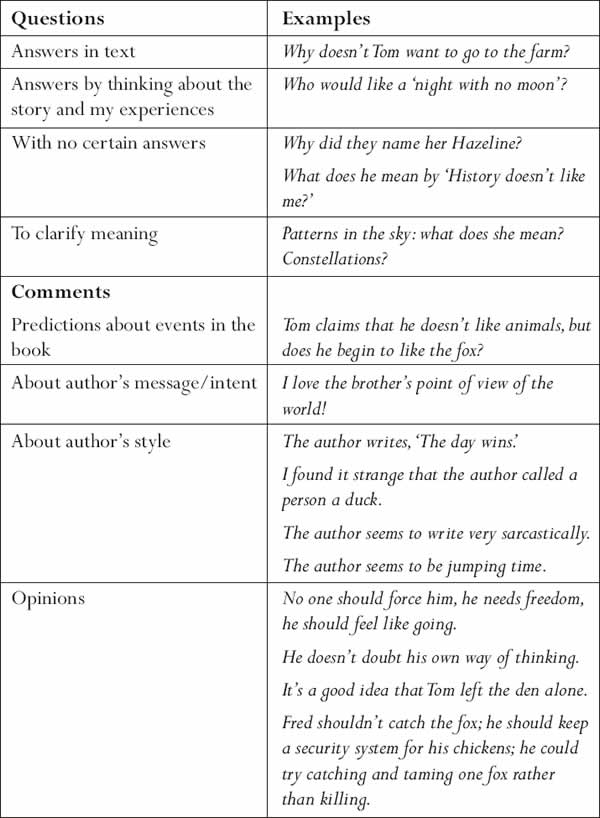 Once the children became aware of the kinds of questions that were possible, they could generate more, and with a freer spirit. Their horizons broadened and the process of reading became dynamic and meaningful. I must say reading the stories and novels with them made the process so alive for me too! I would like to share this poem by Billy Collins on the nature of reading texts for the young, by way of conclusion.

I can see them standing politely on the wide pages
That I was still learning to turn,
Jane in a blue jumper, Dick with his crayon-brown hair,
Playing with a ball or exploring the cosmos
Of the backyard, unaware they are the first characters,
The boy and girl who begin fiction…

…It was always Saturday and he and she
were always pointing to something and shouting, "Look!"
…They wanted us to look but we had looked already
and seen the shaded lawn, the wagon, the postman.
We had seen the dog, walked, watered and fed the animal,
And now it was time to discover the infinite, clicking
Permutations of the alphabet's small and capital letters.
Alphabetical ourselves in the rows of classroom desks,
We were forgetting how to look, learning how to read.